African swine fever is a highly contagious and deadly viral disease affecting both domestic and wild pigs of all ages. It is caused by a large DNA virus of the Asfarviridae family, which also infects ticks of the genus Ornithodoros. Although signs of ASF and classical swine fever (CSF) may be similar, the ASF virus is unrelated to the CSF virus (E-AD-C053; E-AD-E009). Classic sanitary measures may be employed including early detection and humane killing of animals (with proper disposal of carcases and waste); thorough cleansing and disinfection; zoning/compartmentalisation and movement controls; surveillance and detailed epidemiological investigation; strict biosecurity measures on farms. 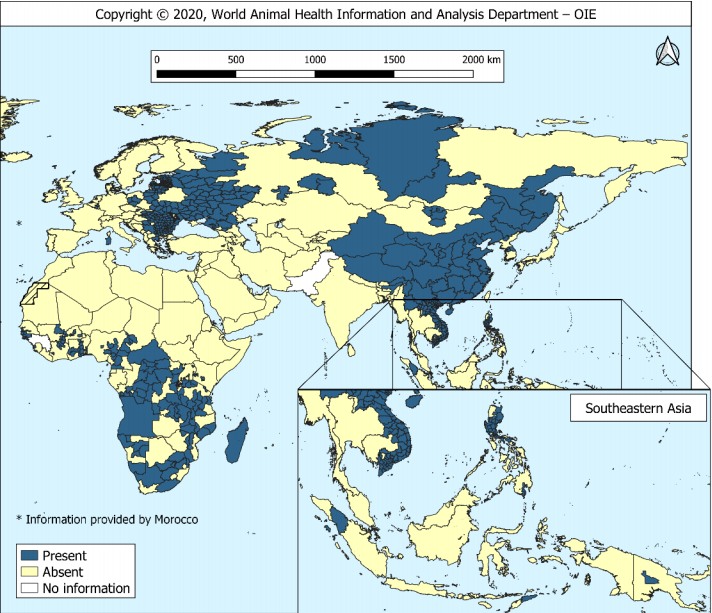 The ASF events reported to the OIE by its Members through the World Animal Health Information System, WAHIS from 2016 to 2020 (up to June 18) were included; as since 2016, a pattern of significant increase in the amount of outbreaks was identified. The disease is present in the African, European, and Asian region.

Since each animal could be at a different stage of the disease, both virus and antibody detection tests should be carried out in outbreaks and control/eradication programmes. A positive test for the presence of the virus (i.e. antigen) (E-AD-C080) indicates that the tested animal was undergoing infection at the time of sampling. On the other hand, a positive ASFV antibody test (E-AD-E106) indicates an ongoing or past infection, where the animals have recovered (and may remain seropositive for life).The presence of ASFV antibodies is indicative of previous infection and, as antibodies are produced from the first week of infection and persist for long periods, they are a good marker for the diagnosis of the disease, particularly in subacute and chronic forms. Carrying out a second confirmatory test such as the IBT, IFAT or IPT is recommended in the case of a doubtful result or a positive result when sera are suspected to be poorly preserved.

Avian influenza (AI) is caused by an influenza type A virus which can infect poultry (such as chickens, turkeys, pheasants, quail, domestic ducks, geese, and guinea fowl) and wild birds.

Foot and mouth disease (FMD) is a severe, highly contagious viral disease of livestock that has a significant economic impact. The disease affects cattle, swine, sheep, goats and other cloven-hoofed ruminants.

The organism which causes FMD is an aphthovirus of the family Picornaviridae. There are seven strains (A, O, C, SAT1, SAT2, SAT3, and Asia1) which are endemic in different countries worldwide. Each strain requires a specific vaccine to provide immunity to a vaccinated animal.

FMD is endemic in several parts of Asia and in most of Africa and the Middle East. In Latin America, the majority of countries apply zoning and are recognised as FMD-free, either with or without vaccination.

The disease is estimated to circulate in 77% of the global livestock population, in Africa, the Middle East and Asia, as well as in a limited area of South America. Countries that are currently free of FMD remain under constant threat of an incursion.

Brucellosis is a contagious disease of livestock with significant economic impact.

The disease in animals is characterized by abortions or reproductive failure. While animals typically recover, and will be able to have live offspring following the initial abortion, they may continue to shed the bacteria. Brucellosis is typically spread when the animal aborts or gives birth. High levels of bacteria are found in the birth fluids of an infected animal. The bacteria can survive outside the animal in the environment for several months, particularly in cool moist conditions. They remain infectious to other animals which become infected by ingesting the bacteria. The bacteria also colonise the udder and contaminate the milk.

Brucellosis in cattle (B. abortus) in sheep and goats (B. melitensis) and in swine (B. suis) are diseases listed in the World Organisation for Animal Health (OIE).

The highest incidence is observed in the Middle East, the Mediterranean region, sub-Saharan Africa, China, India, Peru, and Mexico. Currently, countries in central and southwest Asia are seeing the greatest increase in cases.

Rabies is a viral disease that affects the central nervous system of mammals, including humans. The virus is particularly present in the saliva and brain of infected animals. It is transmitted via the saliva of an infected animal, most often a dog. The incubation period varies from several days to several months. Once symptoms are present, the disease is fatal for both animals and humans.

Around 99% of human cases of rabies are due to bites from infected dogs. Controlling and eradicating rabies therefore means combatting it at its animal source. Mass vaccination of dogs is the method of choice, because it is the only real way to interrupt the disease’s infectious cycle between animals and humans.